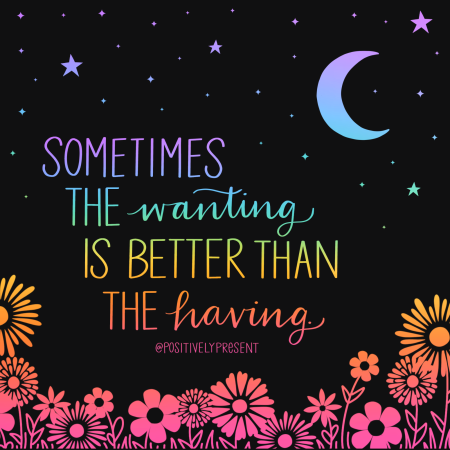 If you need this reminder IRL, print is in the shop here!

Materialism exists because we get excited about something, want to own it, get it, grow used to it (or even feel let down by it immediately after acquiring it), and then strive again for the “wanting” high by identifying a new thing to covet. The cycle can be endless, and even if you’re aware of it, it can be tough to break because wanting something (and striving to make it yours) just feels so darn good sometimes.

The problem is we often don’t pay attention to where in that cycle of want-get-have-want that we actually feel good. Yes, getting a thing you’ve longed for can feel good to obtain momentarily, but frequently it doesn’t feel as good as the actual desiring of it did. And we often (if not always!) return to our previous mental state after we’ve gotten used to possessing whatever it is we once wanted (see: hedonic treadmill).

Often this happens because the way we think about something we want is different from how we feel about it when we own it. Just think about the last time you got a new phone. The anticipation of it, with it’s fresh screen and new features, was thrilling. And the first few days with it might have been exciting, too. But now, even if you use and enjoy it a lot, it’s likely just something you own.

The notion that more stuff won’t bring you more happiness isn’t anything new (and the rise in the minimalism trend keeps bringing it to the forefront in popular culture). Most of us know this (and some of us even put that idea into to practice by resisting the temptation to buy more and more things in pursuit of that short-lived high!), but we often don’t focus on how this wanting vs. having idea applies to non-tangible things we’re in pursuit of, things like love, status, wealth, success, etc.

If you’re in pursuit of anything at all, whether it be personal or professional, tangible or intangible, you, too, must face the fact that sometimes (and, in fact, often), the wanting of something is more enjoyable than the possession of it. Even if we experience this again and again — we find a great love, we get the job we desperately wanted, we achieve the goal we’ve worked on for years and yet still feel the need to desire something new or better or more important — it’s hard not to keep pursuing more and more.

The problem is, if we’re always chasing after the next thing, we’re rarely (if ever) content with where we are now, which makes it pretty difficult to live positively in the present. But how are we to counteract the desire for desire when it’s built into our societies, when we’re expected to constantly be seeking? Here are few ways we can embrace the ever-present desire to want what we don’t yet have.

FOCUS ON EXPERIENCE, NOT POSSESSION

You’ve certainly heard this before: buy experiences, not things. But this concept need not apply only to material goods. It also applies to the intangible desires so many of us have. Experiencing something, whatever it might be, is often much more valuable than possessing it is. For example, rather than focusing the possession of a person (labeling a new romance, needing reassurance that a partner is “yours,” or feeling an ownership over your offspring), what if we focused more on the experiences we have with that individual? Doing so will actually strengthen our bonds or, in some cases, help us to realize that perhaps that isn’t a person with whom we want to be closely bonded. Or, let’s consider the pursuit of greater career opportunity. What if we focused on the experience of working toward it and valued that more than the actual achievement of a new title? Or, once a new title has been granted, what if we spent more time valuing the experience of a new, higher position rather than considering how we might use it to pursue even more status or wealth? Choosing to focus on experiences rather than possessions (tangible or otherwise) is likely to lead to more contentment.

LET GO OF WHAT YOU DON’T GET

It can be hard to realize sometimes when you’re in a state of wanting, but the thing you want comes with baggage you cannot understand until you possess it. In the words of Benjamin Franklin, “If a man could have half his wishes, he would double his troubles.” (Or, in the words of The Notorious B.I.G., “mo money, mo problems.”) Whatever it is you want is going to come with a set of issues that you can’t anticipate now. You don’t know what you don’t know, and sometimes you’re often better off not acquiring the things you think you want. I know the “everything happens for a reason” idea is cliche, but I believe in it. You can’t foresee what will happen in the future, and I’ve found that not getting what I want has been a blessing in many cases (and getting what I want has rarely lived up to its hype). If you don’t get it, it means it’s not meant for you. (Or it’s not meant for you right now. Things meant for you have a way of coming when you need them, not necessarily when you want them.)

APPRECIATE WHAT YOU DO HAVE

If you’re familiar with Positively Present, it’s going to be no surprise to see gratitude  — probably one of the most used bits of advice here — in this round-up of tips, but making an effort to recognize and appreciate what you do have (particularly what you once longed for and then obtained) is one of the best ways to counteract the challenging notion of always wanting something else. Things only bring us joy when we’re aware of them, which is why we take so much pleasure from wanting. When we want something, we’re hyper-focused on it, sometimes consumed by thoughts what life will be like if we have it. Once we’ve had it for awhile, we don’t often spend as much time thinking about it. When you find yourself thinking, “I want…” consider challenging it with the thought, “I have…”

SEEK OUT THE ROOT OF THE WANTING

How much of what you want is what you actually want and how much is someone else’s idea of what you should want? It’s hard to know for sure — after all, we’re all products of the cultures and environments in which we are raised and it can be hard to separate our true desires from what we’ve been taught — but the more you pay attention to the real reasons for what you want, the more you dig down into the roots of that desire, the more likely you are to realize that what you want is actually based on what you think you’re supposed to want. Looking at why you desire what you do (and, just as importantly, what you think will happen if you obtain that thing) will often help you realize that your wants are often rooted in foundations not put in place by you.

“The pursuit of happiness” is part of the US Declaration of Independence and, as result, many people here and around the world have come to associate the pursuit of happiness with living life to the fullest. Happiness has been held up as the ultimate goal, something all people should be striving for in whatever way feels right for them. We’ve come to understand that, while happiness doesn’t look the same for everyone, everyone wants to be happy. But, as I’ve discussed many times before, happiness is a fleeting emotion. It’s wonderful, but it doesn’t last. Making it your life’s goal is setting yourself up for constant disappointment (which often leads to pursuit of the next thing that you think will make you happy). The pursuit of happiness is great for capitalism, but not so great for contentment. Instead of focusing being happy, try striving for contentment. Aim to make the most of what’s happening now, to accept what’s been and look forward to what will be without setting expectations.

When you’re in a state of wanting, it can be difficult to realize this, but it’s true: whatever you think you need to be happy — money, fame, love, acceptance, beauty, attention, success, diamonds, children, a house, etc. — won’t actually make you happier than you are now, at least not for very long. Realizing this doesn’t mean you shouldn’t keep pursuing what you want (for what is life if not pursuit?); it only means that you should stop expecting that the having will be greater than the wanting. It means understanding that, even though it seems strange, wanting something can be fulfilling in itself, and not getting what you want doesn’t have to mean failure. And, most importantly, it means that, cheesy as it may sound, you’ll be able to realize that it is, in fact, a journey towards something has just as much value (if not more!) than the thing itself. 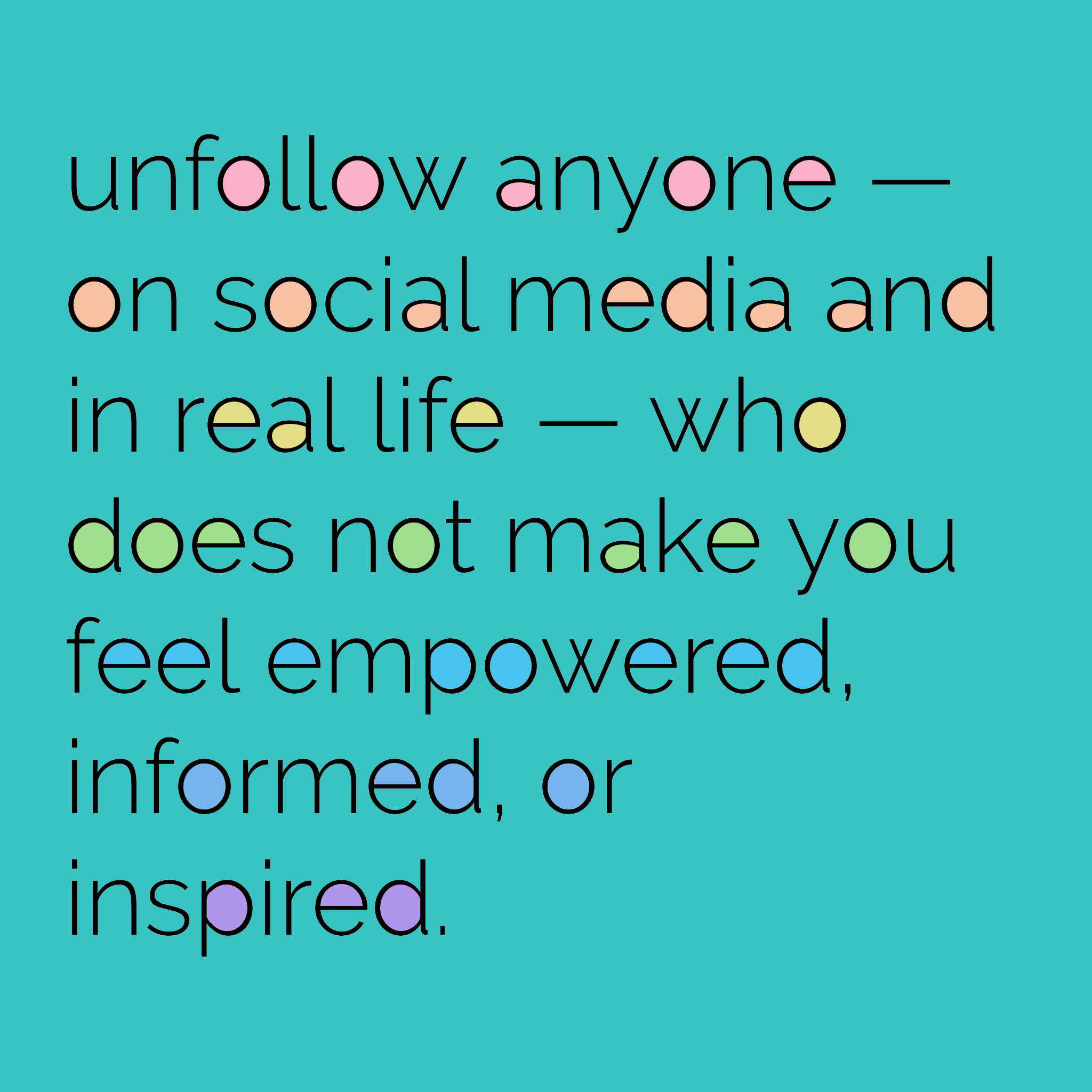 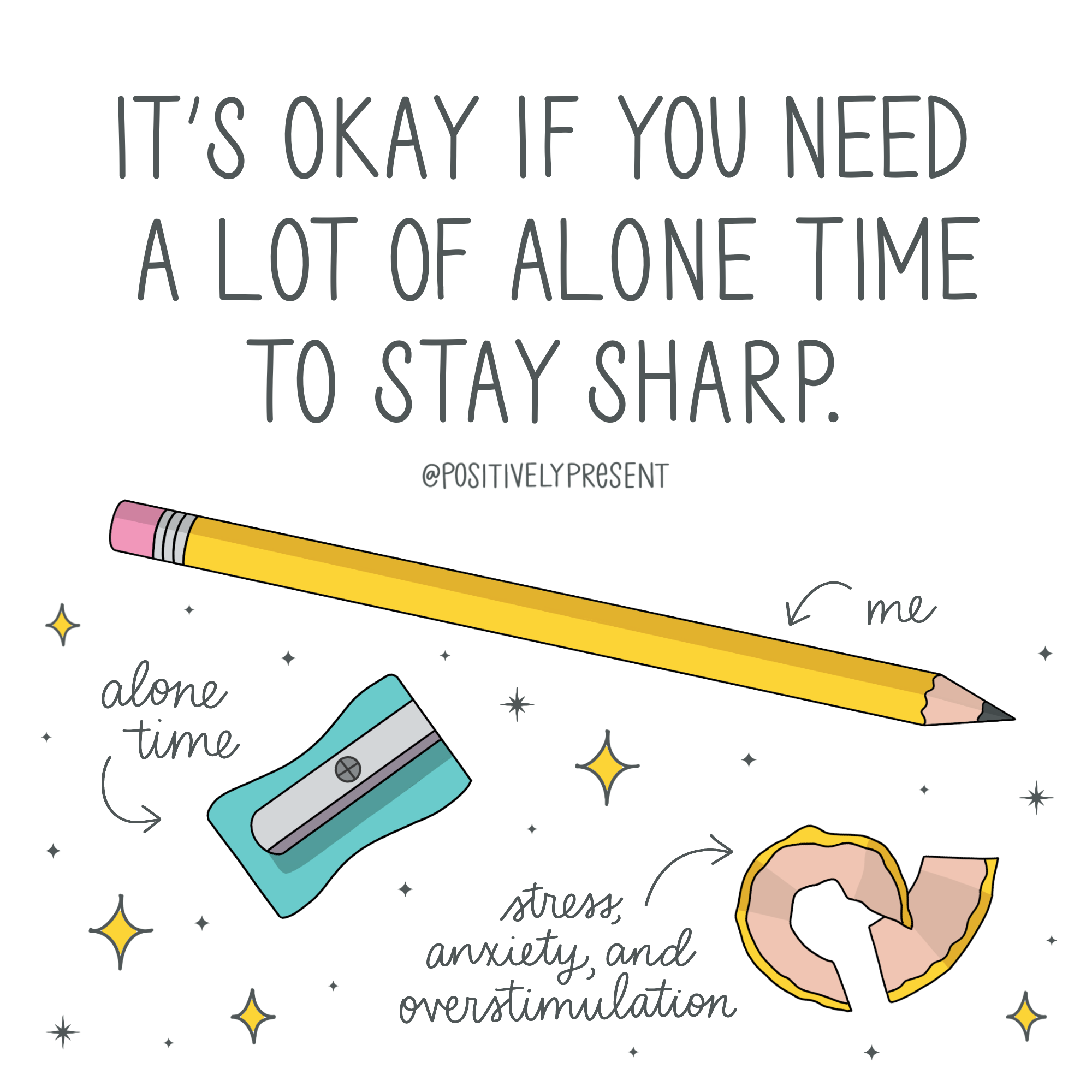 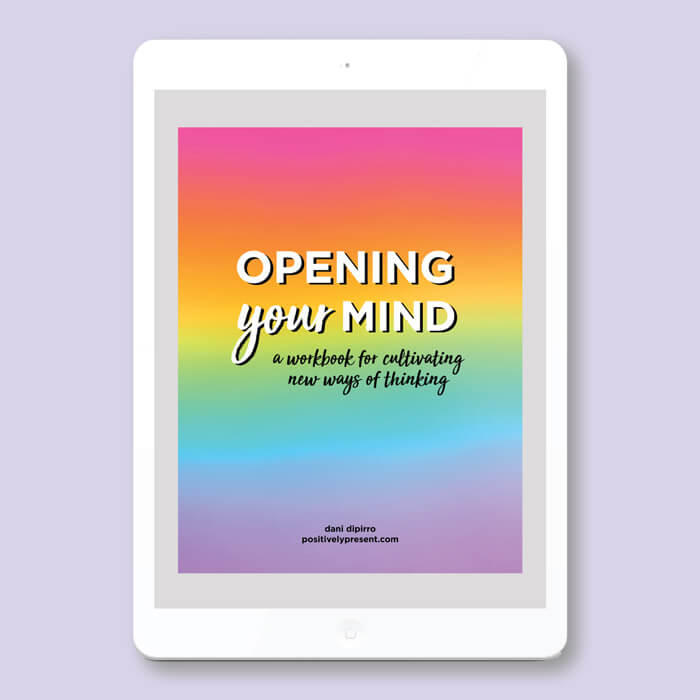 Opening Your Mind : A Workbook For Self-Discovery