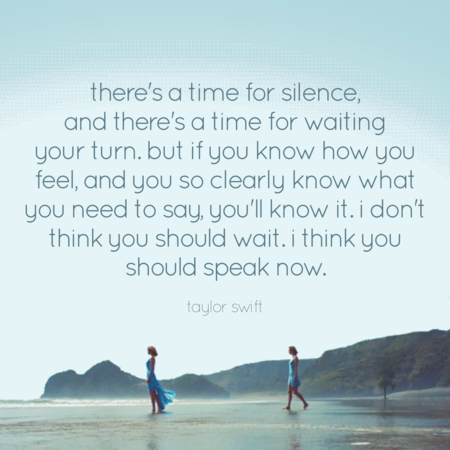 Have you ever been in a position where you really wanted to talk to someone about something but the topic of conversation was really awkward / emotional / sensitive and so you put it off for ages hoping that it would somehow be resolved or disappear but, without talking about it, there was obviously going to be no miraculous solution so you had to actually get the courage to bring it up and you were so scared to do it and it had been on your mind for so long that you didn’t even know where to begin?

Until, one day, I realized that, if I didn’t say what I needed to say, I’d always be wondering what would have happened if I had. When the clock struck midnight on New Year’s Eve, it hit me over the head like a ton of bricks: if I wanted to talk about something (and I wanted change in the New Year), I was going to have to open my mouth and speak. No one was going to do it for me. I had to stop second guessing myself, worrying about the conversation not going the way I wanted it to go, and just do it.

Also, on NYE, I was deeply inspired by this. It might sound silly for a grown woman to be motivated by a music video, but for years I’d been feeling so much anxiety and uncertainty. And, scared as I was to let go of those feelings, I desperately wanted to be “out of the woods,” to be in a place of stability and clarity. After watching the video (over and over again!), I knew the only way I’d ever be the version of the girl at the end of the video would be to open my mouth and speak the words constantly circling in my mind.

In a way, the video is very much a metaphor for what it feels like when you’re scared to have an important conversation — you’re overwhelmed by feelings of anxiety, wondering what could be, scared of where you are but just as scared of what will happen when you eventually are brave enough to speak your mind. Whether you’re having a relationship-based conversation, a salary negotiation, a serious talk with a boss or client, or a heart-to-heart with a friend, the point leading up to the actual speaking is a scary time indeed.

But the only way to get out of the woods — out of that place of anxiety and uncertainty — is to use your words. As someone who put doing this off for months, I know just how hard this can be. I finally had the courage to say what I needed to, and I know you can too. Here are some of the best pieces of advice I can offer for anyone struggling to have a tough conversation:

KNOW THE OUTCOME YOU WANT

Get specific about what you really want before you launch into a tough conversation. It’s not enough to think “I want to make more money” or “I want her to be more affectionate.” You need to have concrete desires in place, like “I want a 10% raise” or “I want her to hold my hand in public and spend more time cuddling with me.” If you don’t know (and say) specifically what you want, how is someone else supposed to give it to you? Imagine (in detail!) what it will be like to have the exact outcome you want. Also, ask yourself why you want this. Understanding the why will show you what you’re really looking for. Do you want more money because you feel unappreciated at work? Will money make you feel more valued? Do you want a committed relationship because you truly love this specific person? Or do you just want a relationship in general? Getting to the heart of why you want what you do will help you have a much more productive conversation (or it show you that you don’t need to have the conversation at all!).

THINK ABOUT THE OTHER PERSON

When it comes to big scary conversations, it’s important to consider not only your own needs and desires, but also those of the person (or people) you’re communicating with. Before conversing, spend some time thinking about what outcomes they might be hoping for, how they might perceive what you have to say, and how they generally prefer to communicate. Try vividly imagining the conversation from the other person’s point of view. How might your boss perceive your resignation? How might your partner take the news that you’d like to spend some time apart? What would it be like to be the friend with whom you’ve had a disagreement that you’re trying resolve? Considering how the other person might feel and what s/he might experience is important for having a meaningful interaction. Just as important is considering how this person prefers to communicate. For the most part, big important conversations should happen in person, but that’s not always possible, so consider the best method of communication — not only for you, but for the other party as well. And, last but not least, take into account how this conversation will impact your relationship, not just from your perspective, but from theirs as well.

Going into an important conversation, it’s useful to ponder what would happen if the best possible outcome occurred. What is the absolute best-case, most amazing scenario? What other positive possibilities might you not be considering? (For example, what if you boss isn’t able to give you a raise, but is able to offer you a different position that you know will be more enjoyable?) Before you talk, try thinking outside the box and imagine the craziest (best!) possible scenarios. For example, if you’re asking for a raise, imagine being offered not only the amount you’re asking for, but also a better title and a corner office. Consider how these best-case scenarios would play out. What are the upsides and the downsides of getting exactly what you ask for? What if, for example, you ask your boyfriend to spend more time with you and he suggests moving in together? How would you handle a scenario in which you’re given way more than what you asked for? Pondering the positive possibilities will help you feel more prepared as you go into the conversation and may help you identify aspects of the situation you might not have considered.

On the flip side, it’s also important to consider worst-case scenarios. Overthinking what could go wrong or worrying about the future isn’t very useful when it comes to living a positively present life, but there’s something to be said for considering a worst-case scenario and investigating how you might overcome it if it were to happen. When you imagine what could go wrong, you’re likely to come up with solutions and you’ll realize that, even if the worst thing were to happen, you’d be okay. If, for example, you were fired for asking for a raise (unlikely to happen, but just consider it), you’d most likely find another job and probably be thankful you were no longer working for a company that fires employees for asking for better compensation! It’s important not to dwell on worst-case outcomes (or best-case either), but allowing yourself to consider them will help remove some of the fear you’re feeling. Once you’ve considered what could go wrong (and how you’d cope), you’ll feel braver when beginning your conversation. Also, keep in mind some of my favorite lyrics from “Out of the Woods”: the monsters turned out to be just trees. Sometimes the worst thing is in your mind and the reality isn’t all that scary.

CHOOSE A GOOD TIME TO TALK

There’s never a perfect time to have a challenging conversation, but there are some really bad times to have a tough talk. Some examples: when you’ve had no sleep the night before; when you’re really hangry; when you’re super stressed — or when the other person is any of these. First, identify when an ideal time to talk would be for you. If you could choose any situation / time / place, what would it be? Are more articulate and alert in the mornings? Or do you define yourself as a night owl? Would you rather talk in private or in pubic? Do you communicate best right after you’ve eaten a good meal or had your first cup of coffee? You can’t always conduct the conversation exactly when you want to, but you can try to do it at the best possible time and in the best possible conditions. After identifying what would be best for you, consider what would be the best time to talk with someone else. Is there a time when your boss seems more relaxed? Does your partner seem more at ease on the weekends? You’re much more likely to get the results you’d like if you conduct the conversation when the other person is in a positive mindset. Not sure when the best time is for someone else? Ask!

This is, of course, the most important piece of advice: just do it. The longer you wait, the harder it gets (believe me, I know this first hand!) and the more it seems like a bigger and bigger deal in your mind. If you keep waiting to speak your mind, what once seemed like something you should bring up turns into a big, huge, scary conversation that you’ll be dreading on a regular basis. Don’t let this happen to you. Find a time that feels right (even if it’s not perfect) and start talking. You don’t even have to come to a conclusion right away — just get the dialogue flowing and let the other person know where you’re coming from. People can’t read your mind and they might have no idea what you want if you don’t tell them! I know it’s hard and I know it’s scary, but if you don’t initiate it, it might never happen and you’ll always be filled with the unpleasant “what if…” sensation. So go on — set a date, schedule a meeting, make the call — do whatever you have to do to start talking.

Here’s an additional piece of advice: once you’ve bravely initiated the conversation (yay, you!), it’s so important to listen closely. I cannot stress this enough: listen. If you’ve prepared a lot for the conversation, it’s tempting to focus on what you have to say and what you want the outcome to be, but try your absolute hardest to listen carefully to what the other person is saying. The best way to have a productive conversation of any kind is to be a good listener and respond to what someone else is actually saying. As you probably know, it can be difficult sometimes to accurately interpret others’ words, and nothing screws up an important conversation more than assumptions and miscommunications. These can be minimized if you listen fully to what others are saying — not what you want them to say, not what you think they might say, not to how you read into the words they’re saying. Listen to the actual words being spoken and, if you’re not sure about the meaning, don’t guess. Ask! Having the courage to have tough conversations is an act of self-love. Want to empower yourself with some more serious self-love and acceptance? Start loving yourself (or increase the love you already have for yourself!) with the inspiration and motivation found in Loving Your Self: An Empowering Workbook for Increasing Self-Love. Filled with uplifting encouragement, thought-provoking questions, and engaging exercises, Loving Your Self is an essential tool for mastering the art of self-love. Learn more about the workbook here and purchase your own copy here. 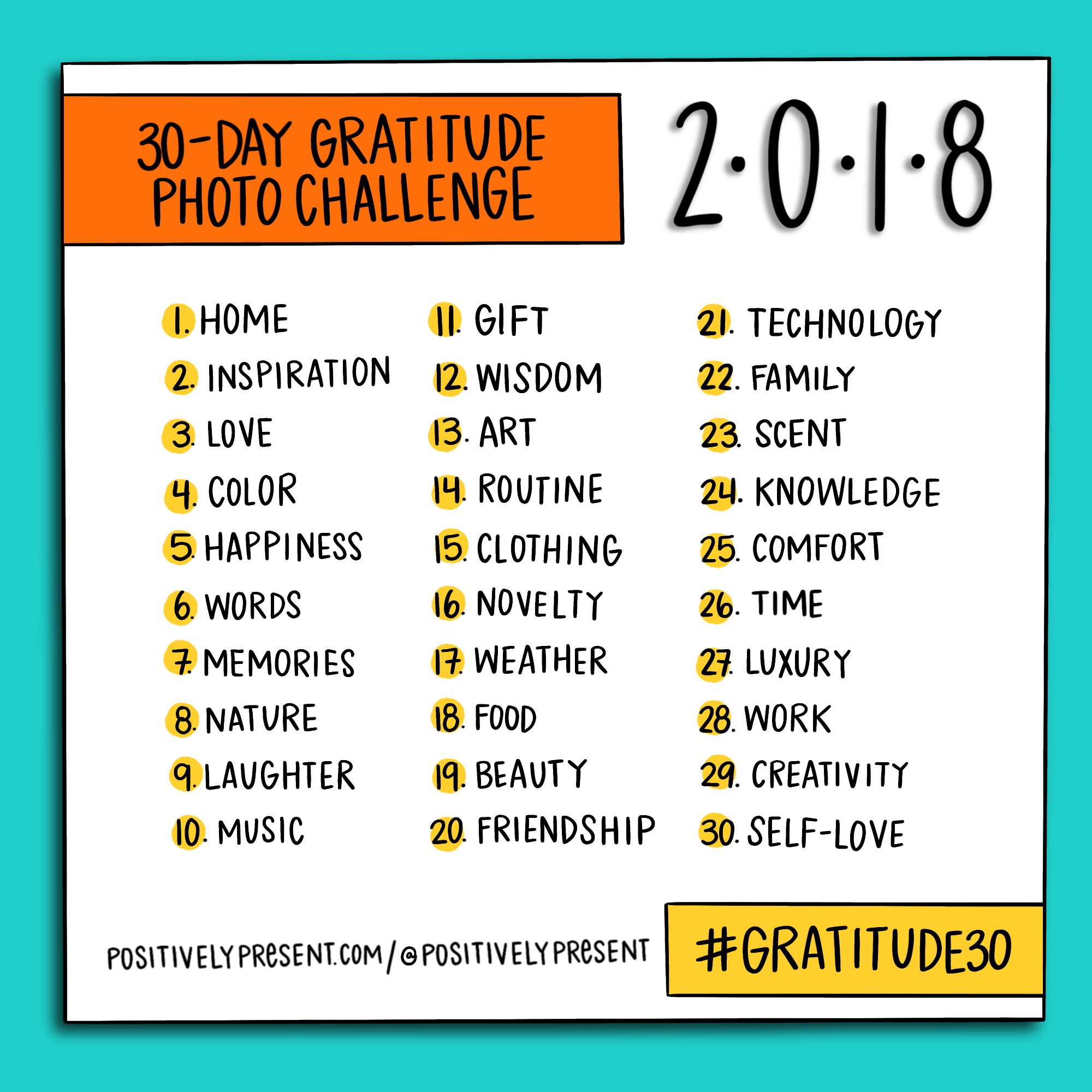 Get Grateful! : The 2018 Gratitude Challenge Is Here 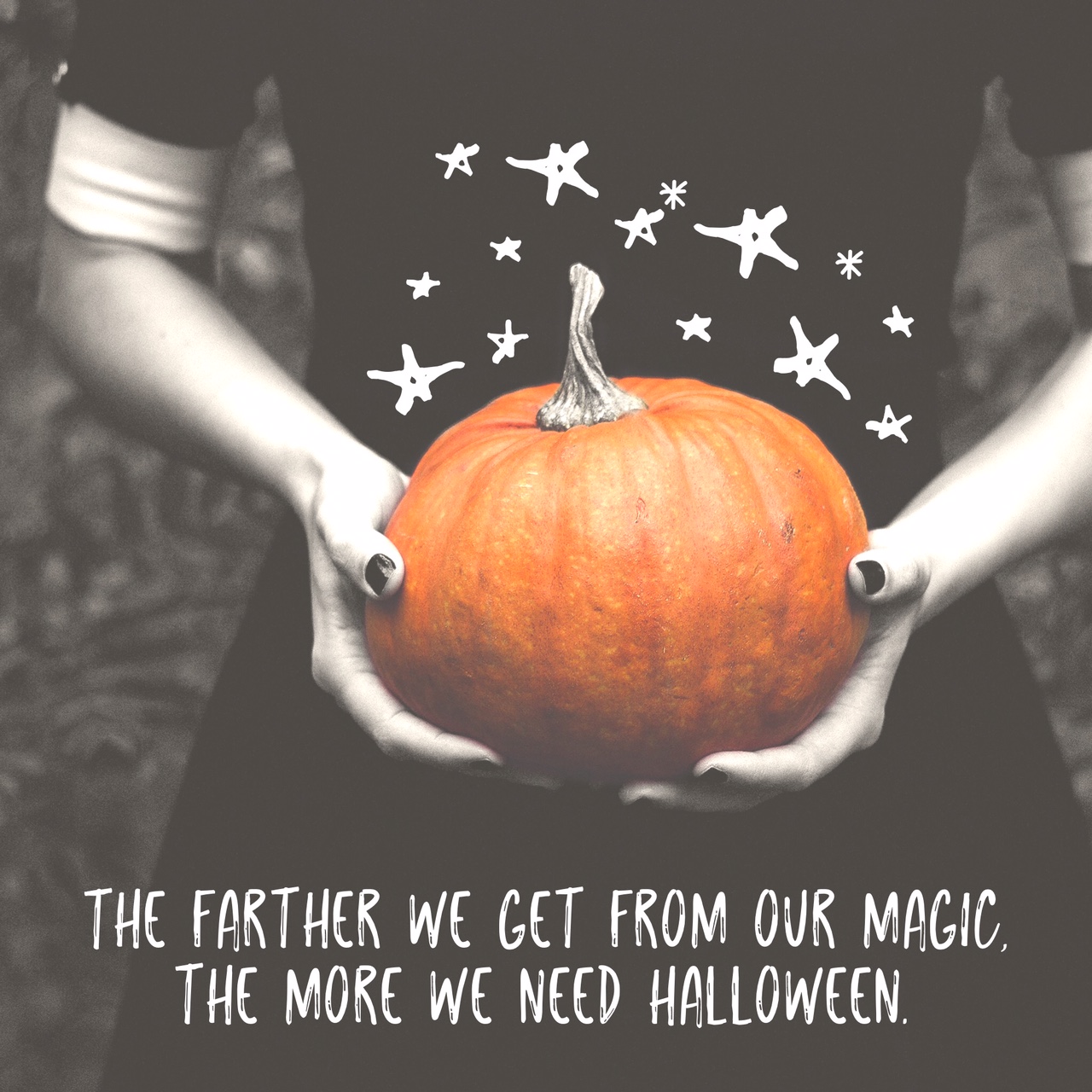 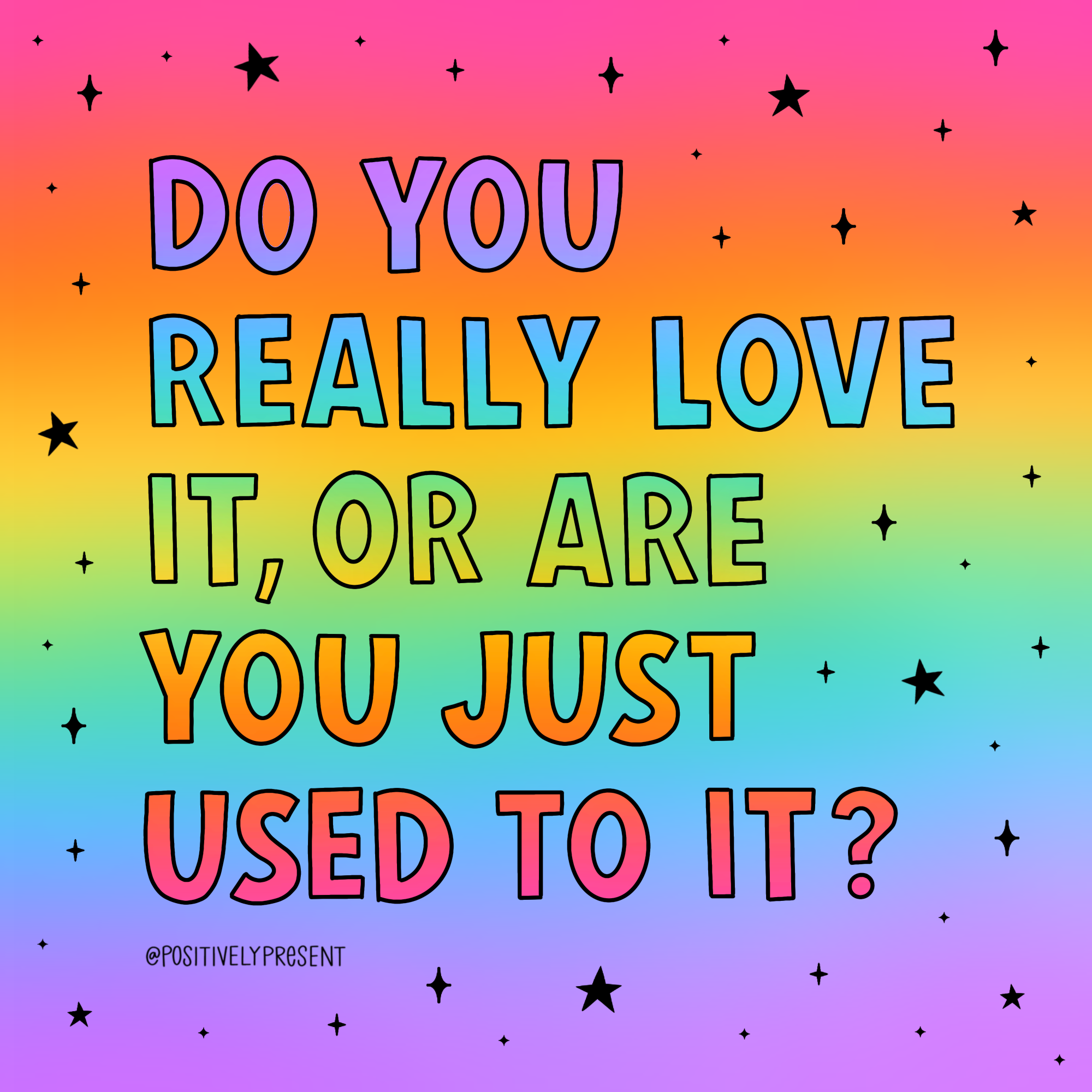 Do You Really Love It?